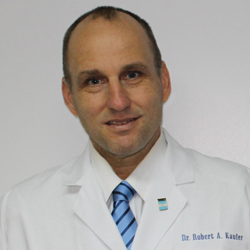 Dr. Robert Kaufer was born on 17 November 1965 in Washington DC, while his father was specializing in Ophthalmic Pathology at the Armed Forces Institute of Pathology. He graduated in Medicine at El Salvador University in Buenos Aires (M.N. 83.878 / M.P. 445.193-4, licenses), where he also achieved the degree of Specialist in Ophthalmology, which was revalidated by Colegio de Médicos de la Provincia de Buenos Aires.

In 1991 he made an internship in ophthalmology at Augenklinik Erlangen, in Germany and, back in Argentina, during his residency, he performed the first cataract surgery with topic anesthesia made at the institute Prof. Pedro Lagleyze, in Buenos Aires. Medical Director of the Kaufer Eye Clinic since 1992 –together with his father– dr. Robert Kaufer stands out as a cataract and refractive surgery specialist. For his knowledge and personal experiences various professional and academic institutions invite him periodically to present at conferences in international congresses.